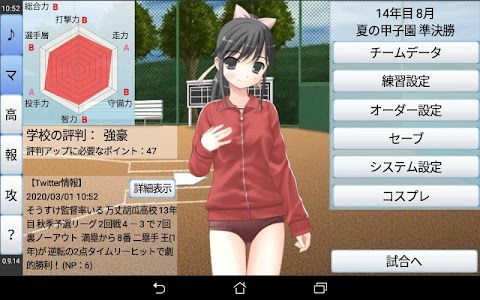 # Game Outline
I've loved baseball games since I was a little girl so I developed a high school baseball simulation based on the concept that I think is the most fun.

We want to develop players who are as unique as the protagonists in baseball comics.
The game has a good balance of hitting defending and power no matter what you develop it for.
When I'm hitting a good-bye hit I want to use cool background music and shout out the deciding lines to get the game going.

This film is the realization of all these things.
Let's become the manager of a high school baseball team and nurture players who are full of individuality such as "pitchers who can't control pitches or change pitches but pitch great fastballs" and win the prefectural tournament and the Koshien tournament with the aim of winning the national championship.
This is a "dramatic high school baseball simulation" for those who want to enjoy it purely as a strategy and development game with no gacha elements.

Come up with a development plan that is tailored to your player's personality.
The players are full of individuality and during their development the following heated episodes have occurred.
A genius pitcher who can't check first base due to the yips awakens after overcoming the hardships!
A beginner in baseball (ability all G) only practiced hitting and became a regular in the summer of his junior year!
In addition the game balance has been adjusted based on data sent to us by users during the development period so there is no inferiority or inferiority depending on what is important to breed and there is no inevitable way to win in breeding.
(I've gotten a lot of feedback from users who've played a lot of games and I've modified it so that it's no longer a must win method.)
So find your own way to develop and build a team of personalities.

Practice goes smoothly on a monthly basis with Koshien qualifiers in July and September. If you win in the qualifying round you can go to Koshien.

Before the game decide on your stamen in the order setting.
During the game you will direct the tactics as a coach.
You can instruct bunt/stolen base/squeeze/end run/gamble start etc.
Depending on whether or not there is a runner on first or second base it may be easier to pass a grounder between first and second base and tactical instructions can be given that take into account the details of the baseball.
So that you can see this we also display animations for batted ball processing and defensive coordination.
When in a pinch or a chance your friends' hot cheers are displayed and the cut-in of the deciding lines and other hot performances liven up the game.

Since it's set in high school baseball the seniors retire after the summer tournament.
We are also planning to create a "user koshien" feature (not yet in the current version) where teams of users play each other in tournaments keeping data on the teams just before the third year students retire.
We also plan to hold an official User Koshien tournament.

# Report a request or problem
You can report a request or problem at any time by clicking the "Report" button on the left edge of the screen.
Since I'm a single developer there are times when there are delays in responding but all the requests and bugs you send me are used as a reference for development.
The game was previously released for Windows and has been improved over the years based on user requests (more than 100 requests have been responded to in total).
So to speak we continue to develop it together with our users.
We will continue to improve the app to make it more fun so let's develop it together with a report from the [Reward] button.
Show More >