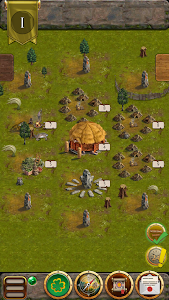 Historical Civilization style online strategy
Start to rule the small nation living in the Stone Age. Study science establish cities develop industry supply your people with resources. Antiquity the Middle Ages the Renaissance New Time and finally Modernity. Great ages are ahead. This is Your Civilization!

This is a team game
Play with friends unite in large countries. If you want to win it is necessary to create a country of 80-121 players.

Play till you win
The state that is the first to build and launch the spaceship wing the game. Game length is ~ 7-9 months

This is a real strategy!
● 5 continents;
● 150 scientific discoveries 6 historical eras;
● 6 climatic zones 9 types of terrain 49 deposits;
● up to 121 players in the country up to 10 cities 115 buildings 20 resources;
● ground battles sea and air battles (planned in future);
● 93 types of troops from savages to tanks and atomic bombs!

Who is your opponent?
National alliances from 99 countries. The game is translated into 6 languages: English Spanish French Italian Portuguese Russian (and many fan translations into other languages).
Show More >